I have now cataloged the  collection of theatre programmes from the Comedy Theatre which opened in the 1880’s on Peter Street, Manchester.

In the archives in Manchester Central Library are these beautifully designed show programmes where the attention to detail is incredible. Each programme is at least four to six pages in size.

With no computer, ipad, or modern day printer in sight, you only have to close your eyes to imagine the amount of work that went into making these. I suspect the theatre must have employed lots of people to make them, or possibly work months in advance to ensure they were ready for each show. 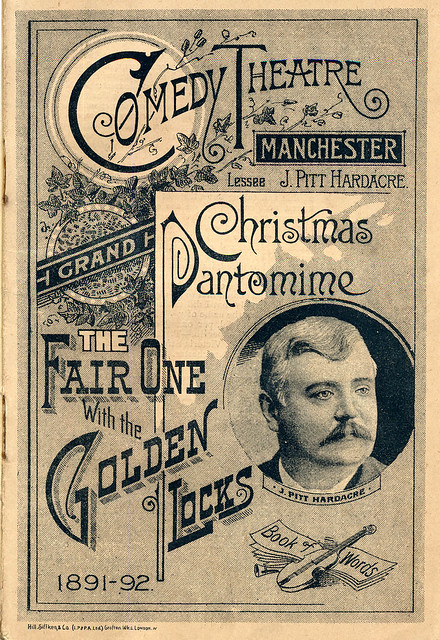 The man who owned the lease of the theatre, Mr John Pitt Hardacre appears to be someone who favoured the arts and had an interest in ensuring all town folk had access to this form of entertainment.

He would often put on benefit shows, some of which were free to the public and attracted many a famous face including that of Vesta Tilly (a very famous performer  from that era). Another interesting discovery was that he put on pantomimes…I wonder if they shouted “he’s behind you” in those days?!

Running the theatre until 1903, John Pitt Hardacre held his final benefit show in aid of his retirement – having Lily Langtry as top of the bill. Lily was also famous for having been the mistresses of   the Prince of Wales, the Earl of Shrewsbury, and Prince Louis of Battenberg. She was the subject of widespread public and media interest.

When he retired the theatre was taken over by a Miss Annie Horniman, of the Horniman’s Tea Company, who paid £25,000 for it (a great deal of money in those days) and when looking at the programmes made during her ownership, you can see a drastic change.  In fact there was a Street in Manchester named after her  which is now Q-Park on First Street and Annie Horniman Street M15 4FN

The beautiful flamboyant programmes were replaced by basic ones and the quality of the paper is nowhere near as good. It makes you wonder about Horniman’s motivation behind this and whether this was a cost cutting exercise or a more strategic, business approach to the theatre world she had entered.

Despite the lack of care and beauty in the new programmes, the adverts are very impressive….providing a great insight into local businesses in Manchester and their target audience (pun intended).

One of the advertisers was a ladies shop in Deansgate, who in the 1900’s sold lovely dresses and fur coats….though these were not for everyone. A muscat fur coat was 4 and a half guineas, which today, would be about £520; or a ladies corset for 2s 11p which is about £16 today. I would take a guess that this shop, in it’s day, might be the equivalent of a store in House of Fraser or Selfridges.

Other advertisers promoted the sale of false teeth, artificial limbs and beautiful pictures of hair styles for hairdressers…..what a combination.

Annie Horniman was clearly keen to make her mark at the theatre. As well as changing the programmes, she also took a hands-on approach to the format of her shows, making them more serious and highbrow, introducing Shakespeare and featuring actresses such as Ellen Terry.

As I continue my journey through the archives, I will post more blogs – unravelling mysteries and gems of Manchester’s past that few of us are aware of in our everyday life. In the meantime, please share this blog, or post comments or questions and I’ll be happy to go on a quest and find the answers you seek