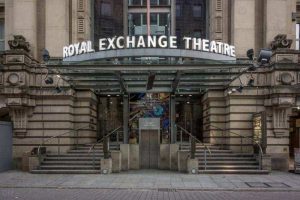 Manchester is very lucky to have the unique Royal Exchange Theatre.  It has been created in the iconic grade II listed Royal Exchange  Building, which is situated in the city centre, it borders St Ann’s Square,  Exchange Street, Market Street, Cross Street and Old Bank Street. 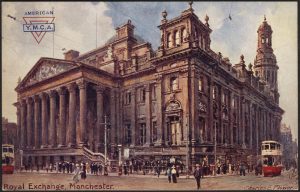 In 1809 The Royal Exchange opened  in order to celebrate of the birthday of George III. Its aim was for the  use of merchants who traded in raw cotton, spun yarn and finished goods throughout the world including Africa.

Its semi-circular north facing frontage had fluted Doric columns, which added to its overall grandeur.

Inside was the exchange room where business was conducted plus a library for its members with more than 15,000 books. The basement housed a newsroom lit by a dome and plate glass windows, its ceiling was supported by a circle of Ionic pillars spaced fifteen feet from the walls. On the  first-floor was a dining-room which was accessed by a geometrical staircase. 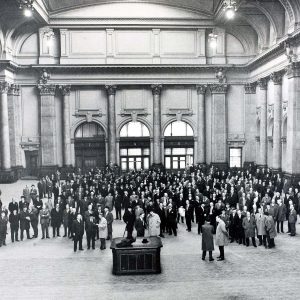 On trading days merchants and brokers struck deals which supported the jobs of tens of thousands of textile workers in Manchester and the surrounding towns and villages. Manchester’s cotton dealers and manufacturers trading from the Royal Exchange earned the city the name, ‘Cottonopolis‘,  making Manchester the commercial centre of the cotton industry, its was the clearing house for the whole of the Manchester area.  So important was the cotton trade to England  that in 1849 the Royal Exchange Building was extended to fulfil its needs.

This beautiful building has been bombed twice in its history.  The first time During an air raid in 1940 in the 2nd World War and then in 1996 by the IRA. 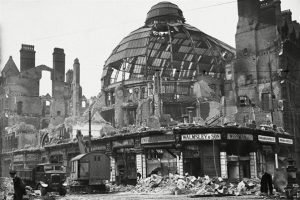 The Royal Exchange Building was seriously damaged during World War II when it took a direct hit from a bomb during a German air raid in the Manchester Blitz at Christmas in 1940. Its interior was rebuilt with a smaller trading area. Sadly in 1968 the trading of the cotton trade in Manchester had declined and the building was no longer in use. The building fell into decline and was threatened with demolition.

After the Royal Exchange theatre opened in 1976 the theatre went from strength to strength when in June 1996 once more the building was bombed but this time by the IRA’s bombing in Central Manchester.  It did considerable damage to the Cotton Exchange which was actually shifted several inches on its foundations by the force of the explosion. Remarkably, although the building was declared unsafe the Theatre, which was built on shock absorbers, survived intact.

In 1998 the Theatre was re-opened by Prince Edward. The opening play was ‘Hindle Wakes‘ written by the Manchester playwright Stanley Houghton. It  was the same play that had been running when the bomb went off.

The emergence of a new Iconic Theatre

The building remained empty until 1973 when it was used to house ‘The 69 Theatre Company‘ which was founded by Braham Murray, Michael Elliott and Caspar Wrede.  They then joined forces with two more  artistic directors; Richard Negri and James Maxwell. Together they came up with a brainwave to convert the building into a theatre in the round.  It was an awe inspiring idea, they then ,set about creating and getting funding for it.

It has a look of a space craft, but the seven-sided theatre is a feat of modern day engineering. It is “suspended” from four of the Hall’s enormous columns, leaving only the ground-floor seating and stage area to rest on the floor.  The three-tiered circular seating structure gives the audience a 360 degree perspective of the stage, making sure nothing goes unnoticed, giving  the audience’s a totally new experience of all  performances. 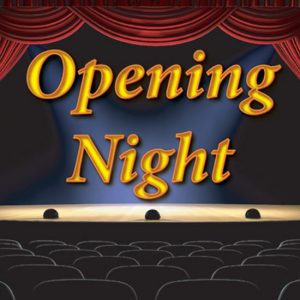 On 15 September 1976 Sir Laurence Olivier  opened the Theatre to raptuous applause. Its first two plays were  ‘The Prince of Homberg‘  by Heinrich von Kleist and the comedy  ‘The Rivals’ by English playwright Richard Brinsley Sheridan .  In 1979 the  charismatic Gregory Hersov was appointed artistic director.  He stayed in this role for  the next 27 years. 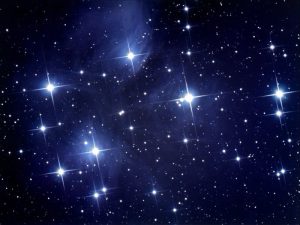 The stars of Yesterday, today and tomorrow 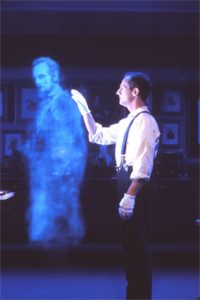 The Haunting of the Theatre.

The greenroom is said to be haunted by a rather glamorous couple that would not be out of place alongside Marilyn Monroe and Clark Gable in some vintage Hollywood movie or perhaps Elizabeth Taylor and Richard Burton. It is said that this couple were once actors in one of the many productions at the theatre.

The wig room is said to be haunted by a much unhappier spirit who is not unfamiliar with throwing things around the room in a fit of rage. She especially doesn’t like white lilies, which will fall to the ground then wither and die if they are placed in the room.

Of the many ghosts familiar to the staff and visitors of the Royal Exchange Theatre, is the one of James Maxwell. During his earthly existence, Maxwell was a devotee of theatre and drama and was praised for his performances in The Doctor’s Dilemma, Blithe Spirit, and the BBC television series Shadow of the Tower. He was essential in re-establishing the Royal Exchange Theatre as a prominent location in British theatre land, so it is not all that surprising that he insists on sticking around the ensure the building is properly  looked after.

Below is a tribute to James Maxwell.