The Library Theatre went from strength to strength and in 1963 Patrick Stewart appeared in ‘Billy Liar’  before going to Hollywood and gaining world wide fame in ‘Star Treck’.

In 1965, 1966 and 1967 they put on many folk music concerts, starring such great names for the folk world such as Jackie and Bridie , Ash Lawrence; the Folk Four; Harry Boardman;  The Clogger’s, Harvey Kershaw,  The Oldham Tinkers, the Moston Brook Clog Dancers,  Jim Mainland, Lena Slack and The Spinners as this was one of the big music trends of the day.

‘Rare Records’  who were the iconic world famous music shop of Manchester, they put on lunch-time music shows.

In 1967 the Library Theatre put on the play A Taste of Honey by Shelagh Delaney,  it was one of my favourite play’s set in our beloved Salford. They made the film in 1961 and starred Rita Tushingham  and Dora Bryan

Again in that year Roger Tonge appeared in a different play, he later went on to gain fame in ‘Crossroads’ one of  our early soaps as Noele Gordon character Meg Richardson’s son, Sandy.

In 1970 The Scaffold appeared I find it strange that such a theatre as the Library which was famous for its serious plays should put on these music performances,

In 1971 Manchester Polytechnic Theatre Department put on a series of plays featuring their students at that time.  Included in that year were several who went on to become famous stars such as Amanda Burton, , Richard Griffiths, Bernard Hill, John Thompson, David Thelfall, Julie Walters.  Sue Cleaver, Kevin Kennedy, Elizabeth Estensen and Jeff Hordley have all ended up as top Soap Opera Stars and Steve Coogan, Jenny Éclair and Debra Stephenson as comedians as well as actors.  What a scoop for Manchester Polytechnic !!

In 1974 Alan Rickman appeared in the panto Babes in the Wood. Other famous names that also appeared were Liam Neeson in 1974, Meg Johnson in 1979 and Miranda Richardson in 1980, Roy Barraclough, Sue Johnstone ( she was bottom of the bill) and John Jardine in 1982

In 1989 they put on a play by Sue Townsend called ‘Ten Tiny fingers , Nine Tiny Toes’ , it starred Brian Capron and Ian Mercer who went on to gain fame in Coronation St.  In 2004 they put on a play entitled ‘Beyond Belief, Scenes from The Shipman Inquiry‘  which I can’t believe was so long ago as it is still a vivid memory for me as at that time I lived in Mottram where the Shipman family lived.

The cafe in the basement of Manchester Central Library had a wonderful cosy atmosphere of its own which was adjoining the theatre. Sadly this has now gone as has the Library Theatre to a new home, ‘Home’ 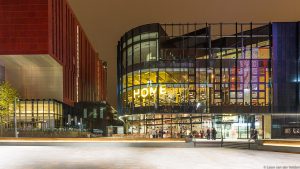