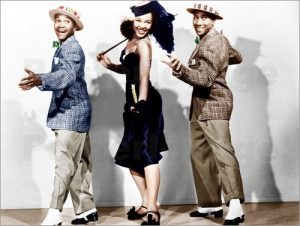 In 1948  the Palace theatre put on a different sort of variety show.  It had 2 of the most popular acts of the day, Donald Peers from the United Kingdom and the Nicholas Brothers from America. I am not sure who was the bigger attraction for the fans. Amongst the supporting artistes were Tommy Fields, Ernest Arnley and Gloria Day, The Myrons and Olsen and his Sea Lions.

Welsh born Donald left home at the age of 16 working as a travelling painter of army barrack walls.  He’d been singing professionally since the early thirties when he joined a seaside concert party in Lowestoft for three pound a week. After World War 2 he decided to resume his musical career starting off by singing with a dance band.  In 1946 he started his solo career, gaining his own BBC radio show ‘The Cavalier of Song’ which ran for over three years. By this time he was a mega singing star ,appearing in the 1950 Royal Variety Show.  At the height of his fame he was receiving 3,000 fan letters a week so when he appeared at the Palace theatre in Manchester he was surrounded by throngs of his adoring fans. Sadly his career started to decline in England and he went to Australia. When he returned to the UK he struggled to get work as his style of singing was not in fashion. Despite this at the age of 61 he reached No 3 in the UK Singles Chart in 1969 with “Please Don’t Go” also appearing on Top of The Pops. Definitely not who you would expect to see performing alongside The Rolling Stone, The Beatles and The Who.

He and his family went to live in Hove where he died in 1973 the town was so proud of this fact that they named several buses after him. 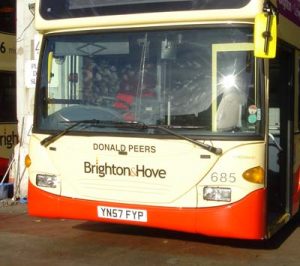 Fayard and Harold Nicholas were an amazing African- american dance and singing act who started their career in Philadelphia. In 1932 they moved to New York starring at the Lafayette Vaudeville theatre in Harlem, also at the Mecca of black music and dance, the Cotton Club when Harold was only 11 years old and Fayard was only 18.

By the time they came to England they were big movie stars having appeared in such great films such as ‘Down Mexico Way’ and ‘Stormy Weather‘. they were self taught, with no formal training.They performed with such great bands as Duke Ellington, Lucky Millinder, Cab Calloway and Jimmy Lunceford. They were considered by many to be the greatest tap dancers of their day, even tap dancing to the jazz tempos of “Bugle Call Rag“.

They also performed a highly acrobatic technique known as “flash dancing“. They became stars of the jazz circuit during the heyday of the Harlem Renaissance, then went on to have successful careers performing on stage, film, and television well into the 1990’s.

Both their parents were talented musicians, their mother playing the piano and their father the drums in their own band.  Its not surprising that the brothers ended up as such talented dancers and singers.

In there later years they taught dance master classes at Harvard University, Janet and Michael Jackson were two of their students.

It was during their tour of England with the production of “Blackbirds” in the 1940’s that gave them an opportunity to see and appreciate several of the great European Ballet companies and incorporated some of the ballet moves into their act.

Like The Myrons, they were on the 1948 Royal Variety Performance alongside Danny Kaye. They also have a star on the ‘Hollywood Walk of Fame’.

Tommy Fields was Gracie Fields younger brother. He was a singer comedian. He never intended to go on the stage but his mother wanted him to follow in his two sister’s footsteps. In 1924 Tommy joined the production ‘Mr Tower of London,’ first selling penny postcards of his sisters during the interval, then eventually going onto the stage. Tommy received good reviews as the ticket conductor during the famous ‘Mr Tower’s Omnibus‘ scene.

Whilst appearing in the show Accordionist Nino Rossini and Tommy struck up an instant friendship.  The pair went on to form a successful double act, ‘Fields and Rossini,’ with Tommy playing the violin and dancing eccentrically, while Nino played the accordion and provided comedy. Tommy loved performing in Panto especially playing the part of Widow Twankey.  Whilst in the show Tommy met his 2nd wife Dorothy Whiteside who was one of the dancers. 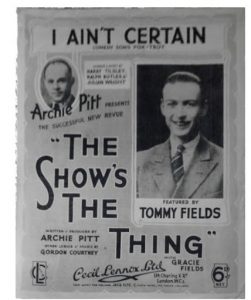 They were a husband and wife comedy dance duo during the 1940’s through to the 1960’s.  Ernest also appeared in three films. In 1943 they both appeared in the movie ‘ ‘Down Melody Lane’ with Billy Cotton, Rene and Billie Houston, Charles Naughton, Jimmy Gold plus many more stars so well know at that time.  A totally different type of dance act to the Nicholas Brothers.

Olsen and his Sea Lions

Carl Olsen was the trainer of the Sea Lions. One of the sea lions was called Billy and he was presented to two children of the Royal family and their mother who were so enthralled to meet him.

While they were working in Prince Cox’s Stage Circus; Carl was having difficulty in getting sufficient fish for the sea lions diet.  One of the artistes in the circus felt sorry for the sea lions and went from shop to shop, scrounging fish, she eventually returned with a huge bag full of food for the sea lions. Carl’s response was “But my seal’s can’t eat that kind of fish!”. So the hungry performers enjoyed a huge fish dinner that evening. 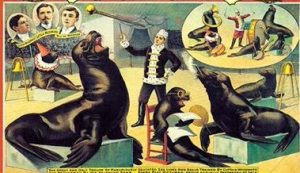 The Myrons were a balancing specialty act. In the same year as the show at the Palace theatre, Manchester they appeared in the 1948 Royal Variety Show which starred The Nicholas Brothers and Danny Kaye who was the top act. 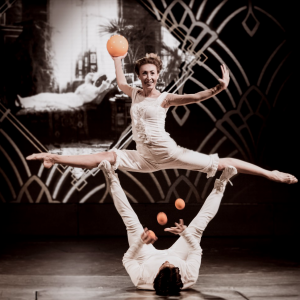