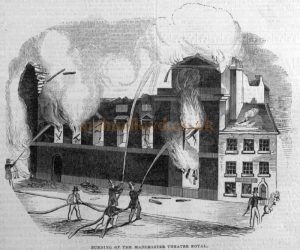 On Tuesday 7th of May 1844, at 6 am, a great fire swept though the Theatre Royal on Fountain Street. Within an hour it had practically destroyed the whole building.  Several fire engines speedily arrived on the scene to try and extinguish the fire. Amongst the fire engines that  were present were ‘The Neptune‘, ‘The Water Witch‘, ‘The Thames‘ and ‘The Vesta‘, but regretfully, the building could not be saved. Thankfully, no lives were lost, however 120 people who worked there lost their jobs.  Fortunately for them, the people of Manchester, who in their usual manor, rallied round to raise funds to keep them from starvation.

The news of the fire made headline, which was widely reported in the many local newspapers of that time such as ‘The Courier’, ‘The Guardian’, ‘The Observer‘, ‘The Advertiser’, ‘The Chronicle’, ‘The Manchester Times’ and ‘The Lancashire and Cheshire Examiner’.

In 1775  the Theatre Royal was opened in Spring Gardens.  It’s next home was in Fountain Street in 1807. Finally in 1845 after being destroyed by fire, it re-emerged at its final home on Peter St. 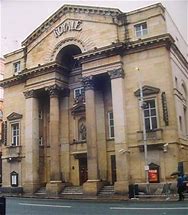 The owners of the theatre were refused permission by their insurance company to rebuild the theatre on Fountain Street, but instead made the owners a very good cash settlement on the condition that it was not built on the original site on Fountain St. The insurance company who owned the land realised that the land was far more valuable to them to sell for warehouse purposes. 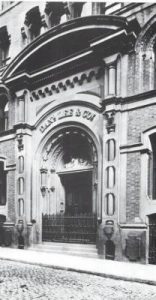 The site was very quickly obtained by Daniel Lee and Co. and in due cause they  built a warehouse on the site for their Calico Printing Business.  Their print works  was based in Castleton, Rochdale.  The company continued trading until at least 1914. This warehouse was the work of the Manchester’s famous architect  Edward Salomon.  He was also responsible for the Manchester Reform Club, The Manchester Spanish and Portuguese Synagogue on Cheetham Hill Road which is now the home of the Manchester Jewish Museum and part of the new Theatre Royal on Peter St. 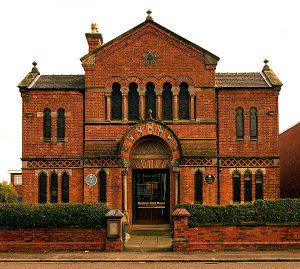 Fundraising for the staff and the New theatre

A fundraising committee was quick formed and raised around £800, which enabled the theatre staff to receive their wages for about six  weeks, until the time when Mr Robert Roxby, the licencee  transformed Cooke’s Circus which was in Mount Street  into the temporary home for his theatre. 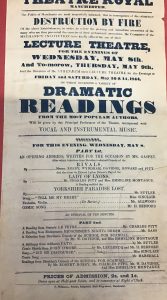 Prior to the new theatre opening two fund raising evenings were organised at The Manchester Mechanics Institute for the 8th and 9th of May 1844. They comprised of dramatic readings by the eminent Charles Pitts and various other members of the cast and songs by Miss Sinclair and Mr H Bedford.  Miss Sinclair sang her rendition of Shakespeare’s song ‘ Bid me discourse’. It was later sang in the opera  ‘Twelfth Night’.  Below it is sung by Dame Nellie Melba

The Mechanics Institute was founded in 1824 at the Bridgewater Arms Hotel with the aim of providing facilities for working men to learn the principles of science through part-time study.  In 1825 it moved to a new building in Cooper Street, off Princess Street.  Its main claim to fame was that in 1868 a group of trade unionists from all over the UK came to Manchester to hold the very first meeting of the Trades Union Congress. 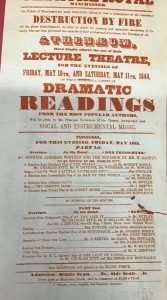 Two more fund raising evenings were held at The Athenaeum in Princess Street, starring the same artists but with a totally different readings and songs including Mr J Reeves, another famous actor and singer of this era sang ‘My Pretty Jane’ . The music was by Sir Henry Bishop and the words by Edward Fitzball’ singing ‘ My Pretty Jane’

Below you hear a beautiful rendition of this song

The Athenaeum was in Princess Street, Manchester, and is now part of Manchester Art Gallery, which was originally a club built for the Manchester Athenaeum which was a  society for the “advancement and diffusion of knowledge”. The building was designed by Charles Barry who is best known for his rebuilding of the Palace of Westminster) in the Italian palazzo style. 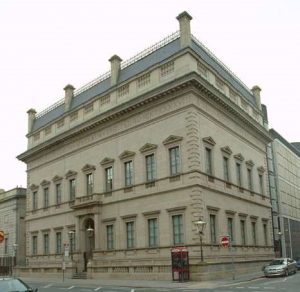 The Victorian writer and social critic Charles Dickens spoke at a fundraising event here in 1843. The speech, promoting educational improvement and learning, was given on 5th October and delivered at a gathering that included the English manufacturer and Radical and Liberal statesman Richard Cobden and Conservative politician, writer and future Prime Minister, Benjamin Disraeli.

Cooke’s Circus started as a circus show travelling around Britain in the late 18th century. It was primarily an equestrian show with over half the acts involving horses.  It was founded by Thomas Cooke around 1780 as a travelling show.  It toured all over England and Scotland, specialising in equestrian acts, acrobats, strongmen and contortionists, many of whom were from Cooke’s extended family. They were one of the more famous “circus families”. 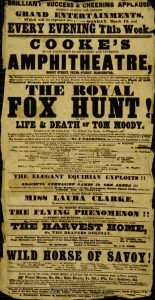 On Saturday May 25th 1844 the company from the Theatre Royal staged Oliver Goldsmith’s  ‘She stoops to conquer’ to a rapturous reception.  Not only did the cast include the regular actors but Robert Roxby, the licensee acted in it. When the Theatre Royal opened in its new premises on Peter Street, Cooke’s Circus reverted to its former use but was renamed the City Theatre until it was demolished in the 1850’s. 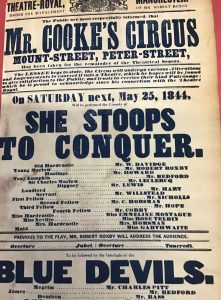 The play was again greeted with rave reviews by the Manchester press. Below is the review  from The Courier newspaper, dated May 25th, 1844. 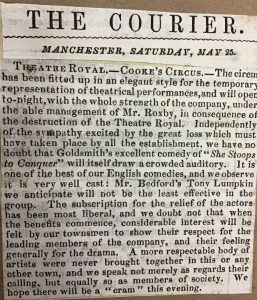 Eventually The New Theatre Royal on Peter Street  re-opened in what was to be its last home on September 29th 1845. It continued to provide excellent theatrical entertainment until it sadly closed in 1921 to become a cinema.  The new thetre had

The playbill for the opening of the new theatre gave a list of all the people who had been responsible for the construction of the theatre inside and out. 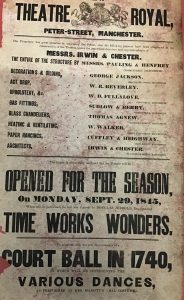 It was built on the site of the Wellington Inn and the Brogden’s Horse Bazaar.  John Knowles,the proprietor of The Theatre Royal at this time, had them demolished to make way for the new theatre.

This time they took precautions to prevent fire destroying the building by  placing a tank on the roof capable of holding 20,000 gallons of water, which was connected by pipes to the stage and the green room. It opened to great acclaim with an audience of around 2,500 people.  It then proceeded to retain its place in the wonderful Manchester Theatre Scene until 1921 when  it became a cinema.  Below is a picture of how it looked on opening night. 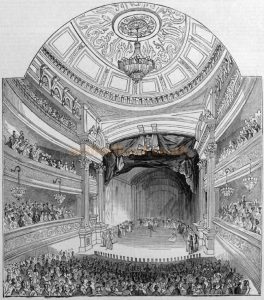