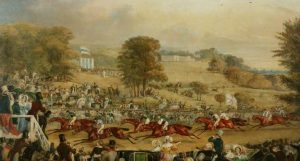 On archiving the playbills for the Theatre Royal, Manchester I came across a playbill from October 1836 starring the famous Shakespearean Actor Mr Kean.  It states that the evening was under the patronage of ‘The Right Honourable Lord R Grosvenor’, Steward of the Heaton Park Races‘  This was so interesting as I’m sure not many of you will know that there was a race course in Heaton Park.

The Merchant of Venice starred the eminent eccentric Shakespearean actor Mr Kean who kept a tame lion as a pet.  Bombastes Furioso , a burlesque tragedy opera starring Mr and Mrs Tayleure, direct from the London West End Theatres. Finally to end the evenings entertainment was the comedic farce ‘The Spoil’d Child’ by Isaac Bickerstaff which a pseudonym used by Jonathan Swift.  A great mixture of a serious play, an opera and a comedy, something to please everybody. 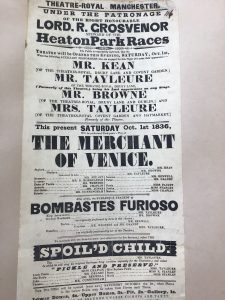 Lord Robert Grosvenor, the 1st Marquess of Westminster was the only surviving child of Richard Grosvenor, 1st Earl Grosvenor. He was initially known as Viscount Belgrave  before he became 2nd Earl of Wilton in 1801.   He had married Eleanor, the only child of Sir Thomas Egerton so upon Sir Thomas Egerton’s death he became the 2nd Earl of Wilton. He was a keen sportsman, racehorse owner and art collector.

Heaton Park is the largest public park in Greater Manchester covering over 600 acre’s . In 1902 The 5th Earl of Wilton sold Heaton House and the park to Manchester Council for £230,000. The park comprises of Heaton Hall, a boating lake and extensive woodlands. There is also an adventure playground and an animal farm for children. 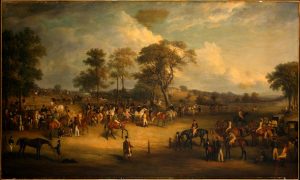 The first Heaton Park Horse Racing meetings were in September 1827. The race course was only in use for 11 years. The present day boating lake covers part of the site on which the former racecourse stood.

When the gates to the estate were thrown open for the first race meeting in 1829 the course was besieged by the working classes of the rapidly expanding industrial town of Manchester. (it didn’t become a city until 1853).  By three in the afternoon the gates were shut and The Earl of Wilton said that in future, only those on horseback or in carriages would be admitted.

So popular did the meetings become, especially for the annual prestigious ‘Manchester Cup’  that it was extended from one to three days. The winner of the ‘Heaton Park Stakes’ was Mr White’s ‘Alecto’. 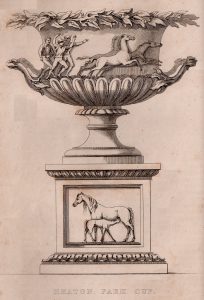 Famous visitors to the race course

At the race meetings the Earl entertained may famous people including the Solider and Prime Minister The Duke of Wellington, the actress Fanny Kemble, Benjamin Disraeli who later went on to become Prime Minister to Queen Victoria. and General Tom Thumb, an American citizen who stood just 31in (32.5cm) tall.

At the meeting in September 1835 professional jockeys were allowed to compete against gentlemen riders.  Members of the aristocracy and landowning classes played a large part in the running of horse racing. They were able to use racing as means of enhancing their social status and maintaining their prestige, both locally and nationally. Their influence was evident; as promoters, administrators, owners, breeders and also in steeple-chasing as amateur riders. 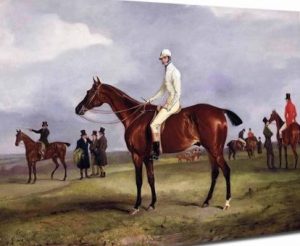 For many of them, heavy gambling was a key part of their involvement in horse racing, and some lost their entire estates through betting. It sometimes brought some of the aristocracy involved in racing into disrepute.

The Challenge of the duel 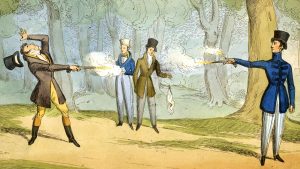 A notorious incident in 1835 turned into a national scandal, culminating in a duel between two of the most colourful characters in England. Lord George Bentinck and Squire George Osbaldeston.

Lord George Bentinck was the son of the Duke of Portland, an Old Etonian, an ex-officer in the Lancers and the Guards, he was a dandy and a heavy gambler.

The other was Squire George Osbaldeston, a canny Yorkshire sportsman, whose achievements included riding 200 miles in eight hours and 40 minutes. He was known as “The Squire of All England”.

Osbaldeston was convinced that the handicapping at Heaton Park was bent in favour of the Wiltons’ aristocratic chums and was determined to get even.

In the St Ledger at Doncaster, he found a brilliant but unknown colt called Rush which he trialed against a mare over the historic course, holding him back and enabling the mare to win by a distance.

When the squire entered the colt for the Manchester Cup at Heaton Park, he was handicapped as a complete outsider. But Osbaldeston had backed him heavily and had accepted Bentinck’s bet of 200 to one against. Rush was a classic “ringer” and romped to an easy victory with the squire in the saddle.

In the spring of 1836, when the two men met Osbaldeston asked for his winnings. Bentinck replied: “I’m surprised you should ask for your money. The race was fixed. ” It was a clear accusation of cheating.

Weeks later, they met again at dawn at Wormwood Scrubs , (not the prison) with pistols drawn at 12 paces.

Bentinck may have been an army officer but had seldom, if ever, fired a weapon. Osbaldeston was said to have shot 100 birds with 100 cartridges and put 40 bullets into the ace of diamonds from 30 yards.

It’s likely that, on the count of three, the squire intended to miss killing Lord George, with his bullet passing through Bentinck’s hat.  Lord George, no doubt relieved, fired into the air and the score was settled. 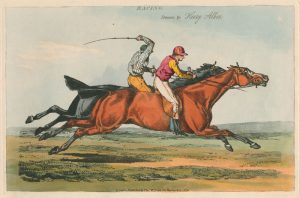 The final running of the Manchester Cup in 1838 was won by a certain Captain Becher whose name lives on with the most infamous fence on Aintree’s Grand National Course. Racing at Heaton Park survived until 1838.