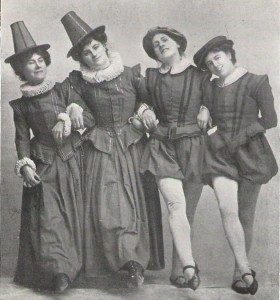 In February 1910 Nellie Chaplin and her all female group appeared at the Gaiety Theatre. They performed their revival of ancient dances to the acclaim of the Manchester theatre going public. The music and the dances were from a long bygone era and consisted of the Sarabande, the Corante, the Coronto, the Jig, the Bourree and the Lilt. 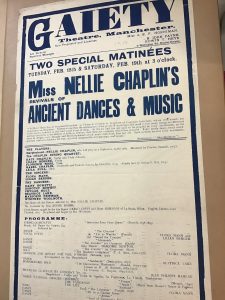 The sisters Nellie, Kate, and Mabel Chaplin were born into a prosperous London family. All three sisters showed early musical talent, they studied at the Academy of Music and then they continued with their studies overseas. Nellie went to Hamburg to learn the Deppe piano method. Mabel continued her studies in Brussels with the cellist and gamba player Édouard Jacobs. Kate studied with the Belgian violinist, teacher and composer Eugène Ysaÿe.  Later they learnt to play the  harpsichord, viola d’amore, and viola da gamba which used in their performances.

In 1893 Kate and Nellie performed for Queen Victoria, she was so delighted by their performance that they were rewarded with jewellery made of diamonds, rubies and pearls.

The sisters were successful and ambitious; they chose to work in quartets and quintets with other female musicians who, like themselves, were excluded from paid employment in a profession dominated by men.

The Chaplin Trio soon became so well known for their regular chamber music series, both by themselves and with others to create piano quartets and quintets. Up to 1900 they did over 183 concerts in England and overseas, they also gained fame and recognition in Berlin in 1899, where the Berlin audiences were notoriously difficult to please. .

Nellie Chaplin played the harpsichord; the one she played was a ‘Kirkmann‘ from 1789 which had been restored in 1907. ‘Kirkmann’s was an English company famed for its Harpsichords and piano’s.

Nellie, meanwhile, opened her own piano school  in London and was teaching as well as performing. In 1903, she began researching ancient dances and did her first performance of  ‘Ancient Dances and Music’ in 1904 at the Royal Albert Hall.  The dances were both French and English as she wanted to revive the dances of the seventeenth and eighteenth centuries.  In an advert on October 9th 1907 she announced that she will hold ‘Classes for old dances’. The dances taught included the following: the Pavane, the Galliard, the Chaconne, the Siciliano, the Rigaudon, the Passepied, the Allemande,the Courante, the Sarabande, the Minuet, the Gavotte, the Tarantelle, and the Jig.  These classes were highly successful.  Nellie worked with choreographer Carlo Coppi from the La Scala in Milan to reconstruct the step sequences and the dances of the old Royal Court as well as folk dances.

Kate played both the violin and the viole d’amour, which is a 6 or 7 stringed musical instrument which was  mainly played during the baroque period. It is played under the chin in the same manner as the violin which she also played.

Mabel Chaplin played the violincello and viole de gamba. A viole de gamba is a bowed string instrument quite similar to the cello, and played between the legs. You can still get sheet music for it today. Both these instruments bear similarities. In that same year Mabel won first prize in cello at the Brussels Conservatoire, she was the first English girl to receive this honour.  In 1895 at the Queen’s Hall, London, she was a soloist at the last night of the Proms, under the baton of Sir Henry Wood.  This was a great achievement as apart from harpists no women were admitted to be part of a British orchestra  until 1916.

The Other Musicians and Dancers in the Concert

The Manchester performance in 1910 starred Leila Bull, the oboist; she must have been a virtuoso of her time as there is a special Leila Bull Oboe Award given by the Royal Academy of Music for solo oboists.

The other musicians were Lilian Berger on the violin. She and Flora Mann were also the singers in the Manchester concert. In the 1920’s they both became part of a group of singers specializing in English madrigals and folk-song who toured throughout Europe and the USA .

Besides the music the main attraction of their concert was probably the dance display by the following dancers Daisy and Dorothy Bowett, Phyllis Holt, Beatrice Lake; Marjorie Newman and Winifred Woolnoth, though usually they had at least 15 dancers, all female.

2nd Concert at the Gaiety Theatre, Manchester in 1913

In October 1913 Nellie Chaplin came back to do a repeat performance. This time on the playbill she says that they have performed before all manor of Royalty, British and others as you will see from the playbill below. 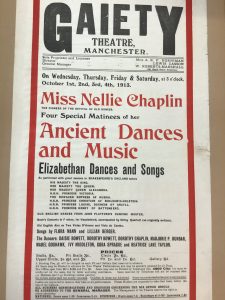 On June 5, 1920, the  premiere of the  of Beggar’s Opera by John Gay took place at the Lyric Theater in London. . The accompanying orchestra consisted of Nellie Chaplin (harpsichord), Kate Chaplin (violin and viola d’amore), Mabel Chaplin (violoncello and viola da gamba), Kathleen Thomas (violin), Lilian Mukle (viola), Louise Mukle (double bass), Florence Mukle (flute) and Leila Bull (oboe). The use of historical instruments aroused particular interest. The production ran until December 1923 and reached the record number of 1463 performances. I’ve just come across this clip from a film version of ‘The Beggars Opera’ by John Gay performed by Dame Dorothy Tutin and Sir Laurence Olivier in 1953.

The sisters’ acquaintance with women involved in the suffragette movement, such as the folk-dance revival specialist Mary Neal (who performed with them on several occasions) had joined the suffragette movement in 1906 might also have been influential on the Chaplin sisters. Even in 1916, when Kate and Mabel formed the Chaplin String Quartet, its other members were always female.

Both Nellie and Kate Chaplin both appeared radio broadcasts. . Evidence of musical activity by the Chaplin Trio dates back to 1929, shortly before Nellie Chaplin’s death. 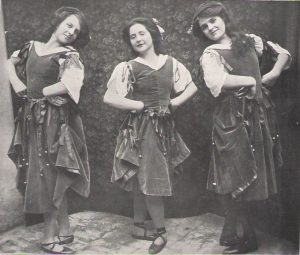