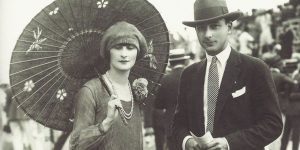 This was the year of the Great Flu epidemic which killed so many people, my grandfather was one of those.  He left behind an expectant widow who already had 4 children under the age of 11. She had to go to a charitable organisation to beg for financial help as sadly there were no social services in those day for people to go to for help.  A Liberal MP Horatio Bottomley was jailed for seven years for fraud. It was also the year that the BBC started to broadcast. One of the first programmes they did was in Manchester. The downside was that you  needed to buy a licence for 10 shillings to listen to the BBC on your radio. One of the most interesting things to happen in 1922 was that Crosse & Blackwell created Branston Pickles which is still available today.

The musical – Maid of the Mountain

In 1922 the musical comedy ‘Maid of the Mountain’  proved to be a winner with the audiences in Manchester, it went on to gain worldwide acclaim.  the show was so popular that there were revivals in 1930, 1942, 1972 and lastly in December 2006.  The memorable songs from the show were ‘Love will find a way’; ‘A Bachelor Gay’; ‘A Paradise for two’.

In the Manchester production of ‘Maid in the Mountain, the bandit maid Teresa, was played by Jose Collins who had previously played this part in the London production She was truly an international star who not only played in the West End, but also on Broadway; she was also a Hollywood movie star, even sharing a duet with Al Jolson. In 1913 she appeared in the Zeigfield Follies.

Her mother Lottie Collins had also been a music hall comedienne and star. She was famous for singing ‘Ta-ra-ra Boom de-ay’   As well as her being famous for singing this song she also was a big success with ‘Daddy Wouldn’t Buy Me A Bow-wow’  Both these songs were hits of the 1890’s.

The male lead part of Baldassare was played by Betram Wallis who was an accomplished actor, singer and film star. He had previously worked in several musicals with Jose Collins  His most famous song of this musical was ‘ A Bachelor Gay’, sadly I can’t find a recording of his version but below is a link to Harry Welshman singing it from the 1932 movie.  If you listen to Frank Sinatra singing ‘It was a Very Good Year’ I think you will notice the similarities of some of the lyrics in both songs.

The World of Operetta

There was a successful season of Gilbert and Sullivan operettas  put on by the D’Oyly Carte Opera Company at the Opera House. They were always popular and played to full houses, a bit like Andrew Lloyd Webber‘s Musicals. Gilbert and Sullivan wrote 14 comic operetta’s with ‘The Mikado’ being their most successful.

‘The cast of the Mikado’

Amongst the many stars that starred in The Gilbert and Sullivan Musicals this season were Henry A Lytton who was a principal comedian baratone who excelled in his role as Koko the Lord High Executioner.   Darrell Fancourt, a bass-baratone was famed for his role of ‘The Mikado’, he starred in more than 10,000 performances of Gilbert and Sullivan Operetta‘s.  Leo Sheffield was another baritone who’s always played the part of  Pish-Tush, the noble Lord to the Mikado.

Elsie Griffin was a soprano who loved her role as Yum Yum, Bertha Lewis who was a contralto who plays the part of Katisha, an elderly lady, in love with Nanki-Poo. Ellen Sharp, a mezo- soprano who played one of the three little maids from school in this touring show, she had many starring roles in their other operetta’s.

On a more serious note the Opera House put on Sheridan‘s play ‘The Rivals’ which starred Sir Frank Benson, who appeared in his own touring companies productions. Benson was quite an outlandish character as when he received his knighthood in 1916, during the First World War, he was dressed as Julius Caesar, when King George V  knighted him in the Royal Box at the Drury Lane Theatre on the night of the gala performance for the 300th anniversary of Shakespeare.

Another serious play to be staged at the Opera House that year was ‘Hedda Gabler‘ written by Henrik Ibsen.  The star attraction in the play was Mrs Patrick Campbell, affectionately known as ‘Mrs Pat’ she was said to be the greatest actress of her era. She was also the inspiration for  Bernard Shaw‘s ‘Pygmalion‘  An interesting fact about Mrs Patrick Campbell was that her 2nd marriage was to George Cornwallis-West, who had previously was married to Jennie Jerome, the mother of Winston Churchill.

Peter Pan and Jack and Jill

What should have been a Christmas pantomime in December 1922 was staged in the February of 1923.  It was Peter Pan and starred Lionel Gadsden as Captain Hook, one of the actress in the pantomime was Primrose Hill, a pretty name but sadly there is no information available about her.

The Christmas panto in 1923 was ‘Jack and Jill’ starring Dan Leno Jnr. as one of the comedy actors, Barry Lupino, as the Dame,  Renee Reel played Jack with Cora Goffin  played Jill; she later went on to marry the powerful impresario Emile Littler.