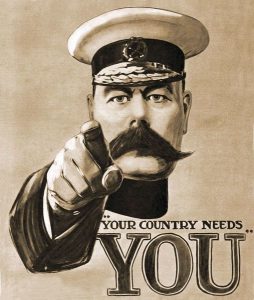 In 1914 in a wave of patriotic fever, thousands of men volunteered for service in Lord Kitchener’s Army to fight in the war that was supposed to be the war to end all wars. Men from all over the world took part, they came from over 30 countries to join soldiers on both sides of the fighting. Wherever you go in Manchester you will come across memorials to the brave soldiers from the Manchester area.  If you venture into Manchester Victoria Railway Station you will see the beautiful memorials to the brave men  who went to fight. 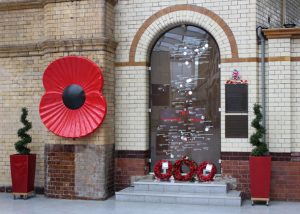 Women weren’t allowed to join the war but they could go out and do some of the jobs that the men had left behind.  Many men were horrified by the idea of women working, even worse, wearing trousers! But the women proved that they could do the men’s work well. Without the women growing food and making weapons, the war could not have been won.  This was a massive change for the future and good of women in society. 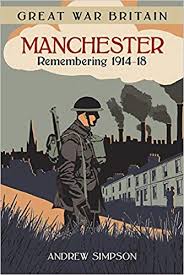 Children played their part in the war effort by making bandages, swabs and slings for wounded soldiers. They also worked growing vegetables, delivering milk, and collected eggs. They protected roads and railway lines, also they delivered messages. Children were even paid to collect conkers which could be turned into explosives! They also wrote letters to soldiers and helped to knit socks and scarves for the troops in the winter months. 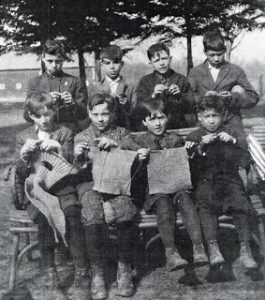 Animals also played a part in the war effort, horses, dogs and pigeons all did their bit. 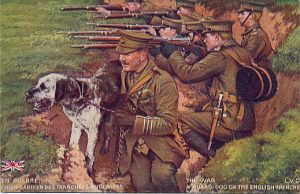 Opera at the Opera House

Throughout the war years, Opera  was the mainstay of this beautiful theatre. The two main opera companies that played at the theatre were The Moody Manners Grand Opera Company and The Beecham Opera Company.

This company was founded by husband and wife,  Charles Manners and Fanny Moody.  Both of these were seasoned opera singers.  Charles Manners was a bass singer and Fanny Moody was a soprano. Prior to forming their own  company they had been with both D’Oyly Carte and Carl Rosa Opera Companies.  The company was so successful that in 1902 they had two touring companies. They became so popular that not only did they tour in the United Kingdom but also in North America and Africa. 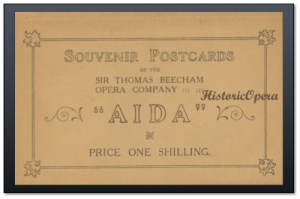 This Opera Company was founded by Sir Thomas Beecham in 1915.  The opera’s they performed were nearly always sung in English which I’m sure helped their audiences a great deal. The idea was to bring opera in English to the general public during World War. He was supported financially by his father, Joseph Beecham. It turned into a successful touring company with casts of mainly British singers,  The Opera company used the services of the Halle Orchestra in their productions in Manchester.  It must have been wonderful to see an opera with its top line singers to the accompaniment of The Halle Orchestra in one evening. 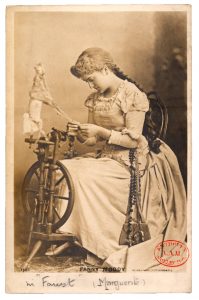 Stars of the Opera’s

Amongst the top stars were Fanny Moody, a soprano, Charles Manners and Harry Brindle were both bass singers. Harry Brindle was famous for singing ‘Drink to me only with thine eyes’.

Frank Christian who was a German Tenor bass singer.  Henry Lytton was an actor and a Baritone who was mainly remembered for his roles in Gilbert and Sullivan Operettas as was Darrell Fancourt, another actor and bass-baritone.

Leo Sheffield was also an actor and baritone whilst Frank Mullings was reknown as a tender tenor singer. Doris Lemon and Eda Bennie were both soprano’s. Edith Clegg was famous as a mezzo-soprano who was married to Norman Allin a bass singer. Frederick Austin who was an English baritone is pictured below. 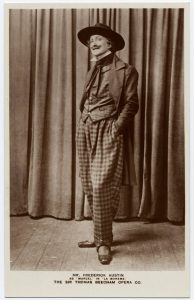 Another great duo who sang in the opera in the war years were New Zealand Soprano Rosina Buckman and her English husband, the tenor singer, Emile Maurice d’Oisly.  These are just a few names of the many Opera Singers who appeared at this time. The world of Opera in that era as in today produced the most amazing opera singers.

The Earl and the Girl

In December 1914 the  musical comedy ‘The Earl and the Girl’ was staged. It was written by Seymour Hicks, the lyrics were by Percy Greenbank, music by Ivan Caryll. The show was produced by William Greet.  It was such a big hit that it was on Broadway and also toured Australia.  Henry Lytton who had starred in the show, used the song “My Cosy Corner” from the show in his music hall act with much success..  The show came to Manchester with the London cast of artists.

The Three Musketeers as a Panto

There was no panto in 1914 but ‘The Three Musketeers was performed over the Christmas period. It starred Lewis Waller, Evelyn D’alroy, Frank Woolfe, Herbert Jarman,  Reginald Dane and Hilda Antony. There is no footage of the version for the theatre but I thought you might enjoy this 1921 film version.

The opening show in 1915 was ‘The Merchant of Venice’ which was followed by  ‘As You Like It ‘and Much Ado About Nothing‘. These classic plays by William Shakespeare starred Margaret Halstan, a seasoned performer and  Milton Rosmer in his first role, as he had just started his stage career that January.  Irene Rooke was another actress who appeared in these plays, who went on to have a very successful film career. 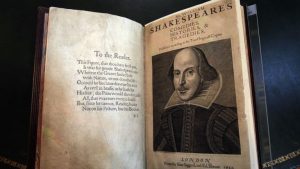 This theme of Shakespeare’s Classics and Grand Opera dominated the Opera House theatre from 1914 to  1918.  As its name implies it’s aim was to bring Opera and the classical plays to the public in Manchester  I wonder whether this worked, or was it only the wealthy educated classes that visited the theatre. Perhaps there were those who wanted to impress others by being seen to attend the Opera.  It is sad to think the theatre was appealing to a very niche market.  Perhaps the owners of the theatre  thought that as there were enough theatres in Manchester catering to the tastes of the mass public putting on variety shows and popular plays and musicals that they would aim for a totally different market.