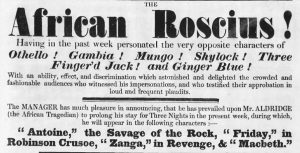 Once again Manchester was a leading city at the start of the very famous artist African Roscius career in England in 1827.

He was the first black actor to appear on the stage in England.  His real name was Ira Aldridge. At the age of just 17 he came from New York to England to pursue a career in acting. Despite being born a free man  in 1807, and having had a good education in New York he decided to leave and seek his fortune an fame in England and Europe.  America at that period of time was still very poisoned by slavery and he did no see his future on the stage as progressing if he stayed in America. 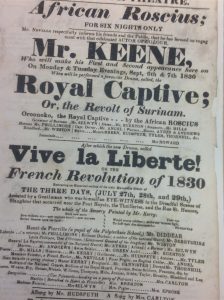 Influences of Shakespeare and a name change

When he arrived in England in 1924 he was was influenced by the Shakespearean actor Edmund Kean. He then chose to go by the name of  ‘Mr Keene, a Gentleman of Colour‘ in admiration of him. After Edmund Kean collapsed whilst performing as ‘Othello’ on stage at the age of 45, Ira decided to stop using that pseudonym as his name but to start using ‘African Roscius’.  He decided on this name after researching Quintus Roscius Gallus, an eminent Roman actor of tragedy and comedy and former slave who had been a tutor to Cicero.

The African part of his new stage name was due to the fact that he turned the insult  of being called African to his advantage hence his new title  ‘African Roscoe’, this was  a good career move as people found him unique and a theatrical phenomenon.  As you can see from the playbills he was a total unique artist and a great crowd puller. 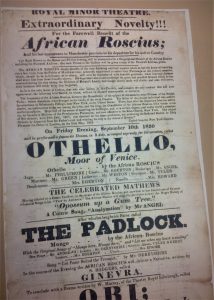 He appeared in 1830 at Manchester’s Royal Minor Theatre in the musical play ‘The Padlock’ with top billing just three years after his arrival!  Beside being an accomplish Shakespearean actor he appeared in melodramas about slavery, and farces that drew on his ability to sing and dance.  ‘The Padlock’, which was written by Charles Dibdin, he played the part of Mungo, a black servant from the West Indies which let the audiences see how he could sing, dance and do comedy.  This character provided the main comedy in the play. Below you can see him as the Character ‘Mungo’.  On the same playbill he appears in ‘Othello’ showing his serious acting skills. 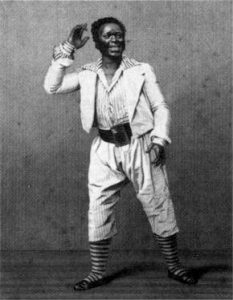 He gained criticism for being uncivilised, and he didn’t deny rumours that he had murdered one of his Desdemona‘s during a performance of Othello. Although this probably was a tactic to increase ticket sales there is a report from one Desdemona, namely Mrs Madge Kendal, confirming that he was violent on stage

He didn’t just confine himself to black roles.  He was perfectly willing to put on whiteface if it meant getting a part he wanted.

Despite the reviews in the paper often being uncomplimentary and racist, he was extremely popular with audiences.  This was probably because of the rise in popularity of minstrel shows. People coming to the theatre for the first time were expecting to see a comic spectacle but instead of making them laugh, he surprised them with his wonderful acting.

Some of the songs that he sang were  ‘What a terrible life I led’ and Let me when my heart’s a sinking ‘ and ‘A great way off at sea’  Sadly I can’t find out more about these songs but later in his career he sang a ballad, “When the Cruel War is Over”,which referred to the continuing American Civil War, surprisingly enough it sold over a million copies of sheet music. It was one of the most popular sentimental songs of the Civil War. The song describes a soldier’s farewell to his lady, the wounds he receives in battle, and his dying request for a last caress. The song, highly popular with white minstrel groups, was an example of the change that had been occurring at this time. 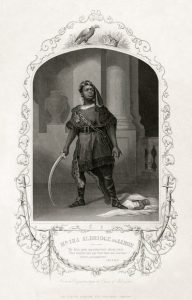 He worked very hard and in very poor conditions in his early career.  Shortly after arriving in England in 1825 he married a Yorkshire lady called Margaret Gill, a woman who was 10 years his senior. She was a very good influence on him and eventually he had saved enough money to acquire an elegant carriage, horses, and a footman.  The carriage was large enough to convey him, his wife, and a small troupe of actors (both men and women) from town to town

In 1863 he was awarded British Citizenship and there is a blue plaque outside the house where he lived at No 5 Hamlet Road in Upper Norwood, London. 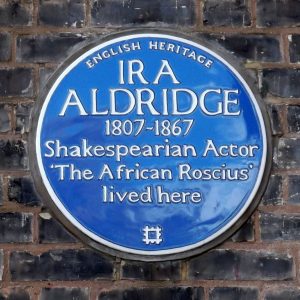 After his wife Margaret died he married Swedish born Amanda Von Brandt; they had 4 children. He gained international fame and toured all over Europe and Russia.   His two daughters, Irene and Amanda went on to pursue careers as opera singers.  One of his sons, Ira Daniel became a teacher and emigrated to Australia, his other son Ira Frederick was a composer and musician.  Sadly Ira died after a short illness in Lodz, Poland in 1867 where he is buried. 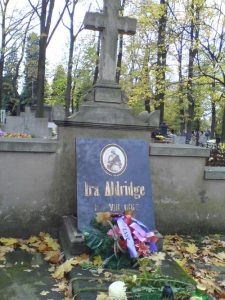 Interestingly enough there is  play, called ‘Red Velvet’ written in 2013 about Ira Aldridge, it starring Adrian Lester O.B.E. and was written by his wife Lolita Chakrabarti.  Below is a picture of Adam Lester playing the part of Ira Aldridge. 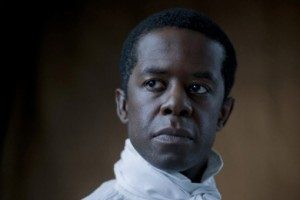