Time to say farewell to this iconic theatre

Sadly in 1934 after 30 years the curtain finally came down for the last time at The Manchester Hippodrome Theatre on Oxford Street which was Manchester’s top variety venue; commonly know throughout the country as ‘the home of variety’.

When it closed its doors on the final performance the audience, the actors and theatre staff joined together to sing a very moving rendition of  “Auld Lang Syne”.  Below is the Last night of the Proms which links into the last night of the Manchester Hippodrome.

The Gaumont Cinema replaces the Hippodrome

In March 1934 the Bernstein Cinema Chain, also known as The Granada Cinema Chain bought the theatre from the Moss Empire Group. In autumn 1934, the Hippodrome Theatre was equipped with a Western Electric sound system and began screening films as well variety shows.

One of the last films to be screened was  “Bulldog Drummond Strikes Back’ starring Ronald Colman, Loretta Young and a very young unknown actress called Lucille Ball.   The name of the Manchester Hippodrome was transferred to the Ardwick Empire Theatre, which then become known as The Ardwick Hippodrome.

One of the last shows at the Manchester Hippodrome

In July 1934 one of the last variety shows to take place on the stage of the Manchester Hippodrome starred two amazing comedians Max Wall and Frank Randle.  Their acts could not have been more different. Also on the bill was Maisie Weldon and Helen Binnie.

Maisie was a singer and impersonator who beside appearing in variety theatres. She went on to become a well-known radio star. Maisie was daughter of Liverpool comedian Harry Weldon who appeared with Fred Karno’s troupe and Charlie Chaplin in 1910 at the Nottingham Empire. Harry Weldon was known for having eyes that seemed always shut, and for speaking with a whistle, especially when saying his catchphrase: “s no use”. One of his most famous comic performance was as ‘Stiffy the Goal-keeper’.  Below is a clip of Maisie singing and doing impersonations, including one of her father.

Max Wall was born Maxwell George Lorimer, the son of the successful music-hall entertainer Jack (Jock) Lorimer. In 1922 at the age of 14 he appeared with a touring theatre company, and made his stage début as Jack in Mother Goose alongside George Lacey.  When he was fourteen, he was listed in the programmes and playbills as ‘The Boy with the Obedient Feet’ or ‘Max Wall and His Independent Legs’.  In the 1920’s he was also listed as an ‘acrobatic dancer’. Max will be remembered  as a cheeky  comedian for his ludicrously attire and the hilariously strutting Professor Wallofski.

Wigan born Frank Randle, was a comedian actor. What many people didn’t know was that he was banned from appearing on stage in Blackpool because the chief constable of Blackpool thought that his act contained a lot of obscenities. Despite this he moved to  live in Blackpool where he is buried.

The owners of the New ‘Gaumont Cimema’

The Granada Theatres Company was owned by The Famous Bernstein Family’, they chose the name Granada for their company after they had been on holiday to Spain and visited the town of Granada consequently  they fell in love with the historic town; hence the name, now famously associated with Manchester.

Just days prior to its opening, the Granada Theatre Company sold the building to the Gaumont Theatre chain which was originally an ofshoot of the French Gaumont Film Company. They were reputed to be the first and oldest film company in the world, 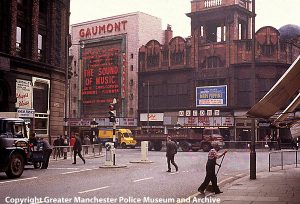 Incredibly in six months the building had been demolished and the new 2300 seater Gaumont cinema had been constructed in it’s place. On the 21st October 1935 the iconic Gaumont Cinema and the famous Long Bar opened on the site of where the Hippodrome stood, just below where MacDonald stands today. The Long Bar was aptly named as it was 60 feet in length. 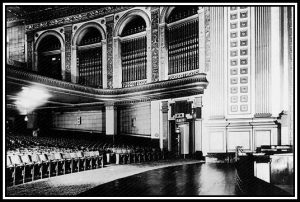 There were 1,300 seats in the stalls and 1,000 in the circle, all with good views of the cinema screen. There was a Wurlitzer organ plus a grand piano installed, Stanley Tudor played the organ for the opening , he was employed to play the organ there until 1953. 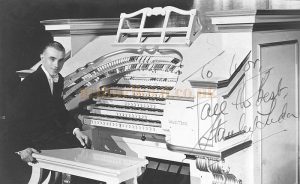 Below is a page from the opening nights programme.

The grand opening was by two famous people Sonny Hale and Jessie Matthews who had the honour of cutting the ribbon .

The opening film a the Gaumont was ‘The 39 Steps‘ starring Manchester born Robert Donat; it also starred Madeleine Carroll. She abandoned her acting career after the death of her sister Marguerite in the London Blitz to devote herself to helping wounded servicemen and children displaced or maimed by the war. 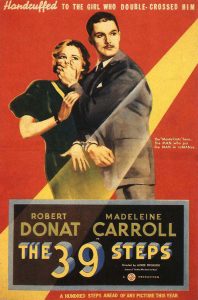 From its opening  it proved to be a highly successful cinema. In the 1960’s it screened top films like Rodgers and Hammerstein musicals “South Pacific”  and “The Sound of Music”, both of these films ran for over 2 years in this cinema.

The Hammond Organ rose up out of the floor during the interval to keep all the patrons in the cinema entertained.  This was in the days when a full house meant an audience of more than 2000 people. At most performances the cinema was full. Below is a clip from the film ‘Brief Encounter’ starring Irene Handl playing the Wurlitzer Organ in a scene with Trevor Howard and Celia Johnson.

Sadly the cinema closed in 1975. After a while it reopened as ‘Rotters Nightclub’ only using the basement and ground floor but in 1990 this closed and the magnificent building was demolished, the site was transformed into an unglamorous carpark.