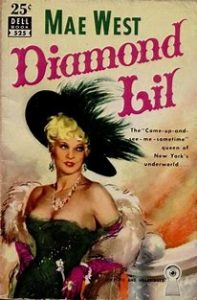 Mae West came to Manchester to star in her very own show that she had written herself called ‘Diamond Lil’. Despite it having censorship problems in America due to the story line being about a racy woman in the 1890’s.  This play was turned into a film in 1933. After hearing the folk song “Frankie and Johnny,” which was inspired by the St. Louis prostitute and “sporting queen” Frankie Baker; it became Mae West’s trademark song and featured in her film “She Done Him Wrong” in 1933, .  Her career started on vaudeville at the age of 5. Like countless entertainers Mae West understood that sex, courting controversy and a good juicy story would be great for her career. After she became the highest-paid woman in America, she said  “Censorship made me.” If you get the chance read her life story and you will be mesmorised by it.

The main star of the show was Mae West but it also starred Noelle Gordon who became a television icon as Meg Richardson in Crossroad Motel.  In 1947 she was a rising star learning her trade in various Rep companies up and down the country.

Diamond Lil, Queen of the Bowery was a diamond-draped prostitute, a singer in a gin joint, and the live-in lover of the Boss of the Bowery, was Gus Jordan. He was the man in Lil’s life, who showered her with jewels and furs.  He was a candidate for the sheriff and a sex trafficker who operated from his saloon on Chatham Square.

Mae West wrote the play with Adeline Leitzbach. Mae correctly believed that the American theatre-goer, tired of living under the dry restrictions of prohibition would welcome a “melodrama of the underworld” that took place during a friskier era when a nickel bought a generous glass of beer. This play was turned into a film in 1933 called ‘She Done Him Wrong’ with both her and Bristol born Cary Grant as the headliners.It was to Cary Grant that she uttered the famous line: ”Why don’t you come up sometime and see me?”  Below is a clip of some of her most famous one liners.

Wings (The Epic Story of the RAF) – written by John Pudney

This was a most unusual show, apparently it was commissioned by the RAF and given to Ralph Reader to produce. John Pudney, a journalist was given the task of writing it. They thought that this extravaganza would help to recruit more men and women into the RAF.  It told the story of flying; of man’s triumph over the air, from the first initial beginning up to the present day in 1947. There were at one time three hundred people on the stage. It also had one of  the R.A.F. bands and Dance Orchestra. It starred many professional as well as both male and female members of the RAF.

I couldn’t find any movie of  this but below is an RAF  recruitment film  from 1946.

The Dancing Years by Ivor Novello

This musical was one of Cardiff born Ivor Novello‘s most popular theatre shows. Vienna is where the musical is set and covers the years 1911 until 1938. It is the story of Rudi, (played by Ivor Novello), who is a penniless Jewish composer and his love for two totally different types of women. By the time it gets to 1938 it brings into the story of his persecution by the Nazi‘s.

Amazingly, this musical was performed twice in the same year at The Palace Theatre, Manchester

The musical comedy  – ‘Under the Counter’

This musical was written by Arthur Macrae, music and lyrics by Mannign Sherwin and Harold Purcell.   Manning Sherwin had one of the biggest hits of the 1940’s with ‘A Nightingale sang in Berkley Square’. The star of the show was Cicely Courtneidge the famous actress, comedienne and singer.  She made her debut on stage at the age of 8 in Shakespeare’s ‘Midsummer Night’s Dream‘ at the Prince’s theatre in Manchester.  This was probably because her father Robert Courtneidge was the producer and manager of that theatre. Her husband Jack Hulbert directed the show.  Wilfred Hyde White was the male star of the show.  Ballard Berkeley also starred in the show, he went on in later years to appear as Major Gowan in Faulty Towers.

The pantomime for 1947 was Cinderella and starred Beryl Reid, who grew up in Manchester despite having been born in Scotland. Her early claim to fame was in the radio show Educating Archie as the naughty schoolgirl Monica and later as the Brummie, “Marlene”.  Later she became the wonderful serious actress most people remember her for in TV, Film and theatre. 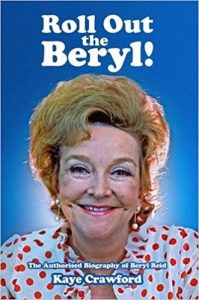 It was written and directed by Robert Nesbitt, the theatre director, producer and impresario.  He was also responsible for putting on at least 25 Royal Variety Shows, he turned down Julie Andrews for one show as he thought she was too young because she was only 12. The panto was staged by Tom Arnold and Julian Wylie who were famous for most the pantomimes at that time.

An interesting discovery was that there was a special show for the workers and families of Metropolitan Vickers Electrical Co Ltd, Trafford Park, Manchester.  They were a British Electrical Engineering Company who built such diverse things such as steam turbines, jet engines and generators amongst lots of other things. During World War Two they built the Avro 679 Manchester Bomber Plane. They were also instrumental in creating the Radar system which the RAF claimed helped win the 1940 Battle of Britain. During it’s peak years it employed over 8000 people.

What a generous and remarkable way of showing their appreciation to their staff by hiring the theatre for  them all to see the pantomime for free. 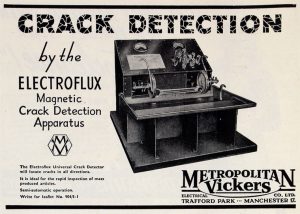